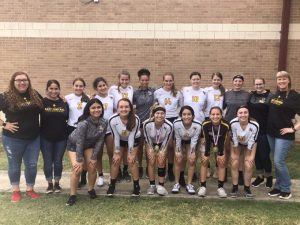 The Hornet volleyball team was in action this weekend in Seguin taking part in the Seguin tournament where they took 3rd place finishing with a record of 4 and 1 on the weekend to close out the tournament portion of their schedule. The Hornets started the weekend strong going 3 and 0 on day one defeating the likes of Burbank. Taft. and San Antonio Christian School.

The Hornets quickly dispatched of the Bulldogs of Burbank 2-0 25-20 and 25-13. Leading the way for the Hornets was Freshman Kylie Bennett with 8 kills and Senior Madison Strzelczyk with 20 assists.

In the second match of the day against the Raiders of Taft, the Hornets took the match 2 sets to 1. The Hornets took the first set 25-15, before falling in set two 21-25 before ultimately capturing the match with a victory in set three 25-15. Leading the way for the Hornets in this one was Junior Cheyenne Dantonio with 10 kills and Senior Maddie Strzelczyk with 23 assists.

In the third and final game of the first day, the Hornets took care of business versus San Antonio Christian School 2 sets to 1. The Hornets battled back after losing the first set 25-17 to take the next two sets 25-22 and 25-21. Leading the way for the Hornets were Brianna Helmke 12 kills and Maddie Strzelczyk with an astounding 41 assists.

Day two started off with an early morning duel with the McCollum Cowgirls. The Hornets would ultimately take this one in straight sets 25-14 and 25-18. This win was a pure team effort with Brianna Helmke, Madison Strzelczyk, and Kylie Bennett each combining for five kills apiece.

In the semifinal round

the Hornets would face district rival Clemens and fall two sets to none to end their run at the Seguin Tournament with a 3rd place finish. Congratulations go out to Maddie Strzelczyk and Molly Polasek for making the All-Tournament Team! The Hornets will be back in action Tuesday night as they hit the road to take on Madison before returning home Friday night to for a match vs the Roosevelt Roughriders with both matches beginning at 7 pm.