The day started with a win over St. Anthony. In that first game, the Lady Hornets were paced by Seniors Maddie Strzelczyk and Molly Polasek who had 21 assists and 12 digs respectively.

The second matchup of day one also resulted in a win, this time over the Queens of Del Rio. Cheyenne Dantonio and Nicole Pruski had solid defensive outings with 2 blocks apiece. Maddie Strzelczyk continued to have a solid tournament registering 19 more assists and 2 aces. McKynna Moxley also registered 2 aces.

The Hornets advanced to Championship Saturday of the tournament where they would begin the day by facing the Holmes Huskies whom they would dispatch in three sets 25 – 12, 19 – 25, and 25-18. Leading the way for the Hornets were Seniors Maddie Strzelczyk and Molly Polasek.  This victory earned the Hornets a spot in the championship match later in the day against Thomas Jefferson High School.

The Hornets would once again rise to the challenge defeating Jefferson two sets to none, 25-21 and 25-11 with Seniors Maddie Strzelczyk and Molly Polasek once again leading the way Strzelczyk obtained 23 assists and Polasek garnered 14 kills helping the Hornets to the tournament title! When asked about the teams’ performance and emotion during this tournament Coach Kelly McDaniel had this to say “This weekend, our team came out with an energy that we hadn’t seen yet. You knew when EC got a point from how loud our girls were. They are truly becoming a family and lifting each other up. I think this is the start of an amazing season.”

The Hornets will look to keep it going as they return home on Tuesday night to face the Brennan Bears at 7 p.m. be sure to come early and be loud! 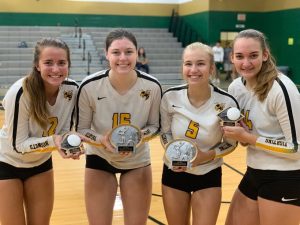 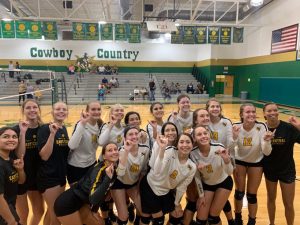